From Kray
Jump to: navigation, search 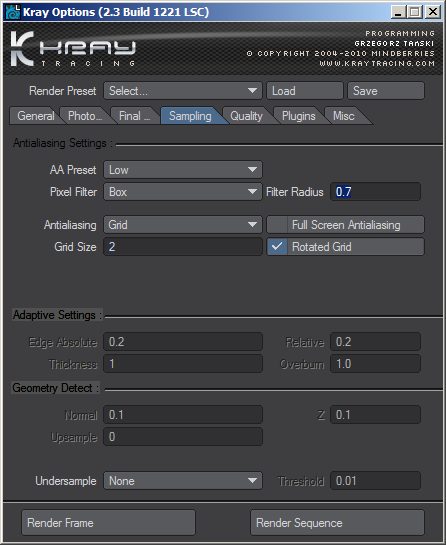 This selection list lets you choose predefined Anti-aliasing preset. When you choose Custom from the preset list advanced settings are unlocked.

Antialiasing is used to smooth out jagged edges. You can choose among several antialiasing methods from this drop down list.

Grid size Controls the subdivision of anti aliasing grid. Kray will subdivide each pixel into a grid of the specified subdivision. So Grid 3 for example means each pixel will be subdivided into sub pixels.

This method helps with occasions when near horizontal or vertical lines don't get smoothed enough by using ordinary grid anti-aliasing.

Kray has two methods of choosing which pixel to anti-alias and which not. One is adaptive (see section 6.4.2.6) and will only anti alias pixels that it considers to have bad AA. The other method is Full screen anti-aliasing or FSAA. When this option is turned on Kray will anti-alias every pixel in a render (instead of only those that suffer from bad AA). This will significantly extend render times but it's worth it if your scene contains lot's of small, fine details.

This mode is useful whenever you are rendering motion blur and DOF (depth of field).

Is another method of anti aliasing that will fire specified number of rays from each pixel marked for anti aliasing. Rays are not shot in completely random way. More rays are shot in the direction where Kray thinks it contributes more to brightness of the pixel – hence Quasi-random. This is why this is very fast anti-aliasing method.

Kray starts sampling point by shooting min number of rays into the scene. Threshold defines how much difference between two pixels is "allowed". If difference is greater than that defined by threshold, Kray will increase rays, until the difference gets smaller than the threshold. It will also stop adding rays if it reaches max rays before reaching the threshold value.

This works similar to new motion blur in LW 9.2. Each subframe is splited in time and different pixels from the same subframe can be rendered for different time. That changes motion blur banding into noise. It will use random method of firing rays and is therefore quite slow compared to the other methods, but it supports motion blur (MB) subframes and can be used if you want to render the scene with motion blur.

Rays will specify number of rays to be used.

This mode is useful whenever you are rendering motion blur and DOF (depth of field).

You can choose between several different methods for filtering of pixels. Each pixel filter will look a little bit different. Some produce sharper and some softer images. Some are better when dealing with moire patterns.

The following options control which pixels will Kray choose for anti aliasing when FSAA is turned off.

Edge absolute is a difference between two pixels. If it is higher that than value both pixels are on the edge and will not be marked for AA.

Relative is a relation between brightness of two pixels (brightness of 1st pixel / brightness of 2nd pixel). Where edge absolute often misses edges in dark areas (not enough brightness difference) relative does not.

Normal and Z is normal angle and distance to camera. Normal will catch geometry edges and also normal differences produced by bump maps. Z will catch differences in depth so even if you have black square on black background it will be marked as edge if z is > zero.

Upsampling Z and normal can be detected to an upsampled image. For example: if you have 640x480 rendering and some details are sub pixel size, they will be skipped in edge detection. If you use upsample Kray will detect normal and Z edges as if you were rendering a larger image and won't miss those details.

Thickness is a edge thickness in around antialiased pixel that will also be marked for antialiasing.

Overburn is used to control weather Kray should anti-alias edges on overexposed areas.

Under sampling is a technique that can save some CPU time needed to perform rendering. This works as follows: In the first pass the image is sampled with lower resolution (Undersample factor defines how low), and if difference between neighbouring pixel values exceeds threshold image is locally sampled with higher resolution.